The young chef from the EUHT StPOL culinary school, Raúl Gisbert, is the winner of the contest “Cuina Jove de Catalunya” with the dish "Vermut en tres mossegades" (Vermouth in three bites). This dish will allow the young chef to represent Catalonia at the 6th European Young Chef Award in Trondheim (Norway) from November 10th to 13th, 2022.

The 34th edition of the contest “Cuina Jove de Catalunya”, one of the long-lasting cooking contests in our country, reopened its doors at the Sant Pol de Mar University School of Hospitality and Tourism after an ellipsis caused by the pandemic.

Five finalists from five gastronomy schools prepared a dish with local food as its primary theme. The chefs defended their dishes in front of a jury chaired by the two Michelin stars, one Michelin green star, and three Repsol suns, Fina Puigdevall from Les Cols restaurant in Olot. During the deliberation, the jury had to evaluate aspects such as technique, skill, creativity, the originality of the proposal, the flavors, or the presentation, among others.

Gemma Moliner head of Prodeca's Gastronomy Area; Rosa Majordomo, member of the board of the Catalan Academy of Gastronomy and Nutrition (ACGN); Ramon Serra, president of EUHT StPOL and Fernando Toda, representing the professional gastronomy publisher Vilbo, formed the jury. 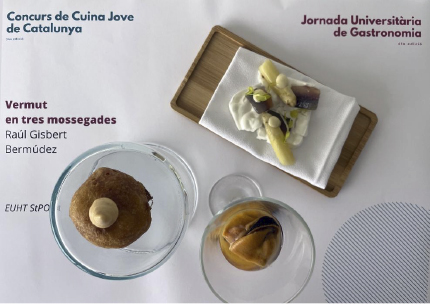 Next stop: Europe
Raúl Gisbert, as the winner, is going to represent Catalonia in the European Young Chef Award, a contest promoted by the IGCAT (Institute of Gastronomy, Culture, Art and Tourism). The EYCA gathers the regional winners from Europe to promote innovation, highlight sustainable food culture and create future ambassadors for regions and local products.